“Digital culture of today is becoming increasingly a field of retrospective” (Suominen, 2007)

Game culture is constantly evolving, so how is it that bringing back an outdated version of a game, save its dwindling number of players.

Throughout this Digital Artefact I explored the online game phenomenon RuneScape, and more specifically, how nostalgia can revive a games popularity or ruin its potential evolution. Addressing the question of; why bringing back an outdated version of a game can result in more response and play time? Leading to the re-birth or division of a gaming community.

In the initial stages of the project I designed an analytical framework to help distinguish the research areas for not only myself but also my audience: That framework is as follows.

To research an area such as nostalgia, I chose to focus on the online gaming programme RuneScape. RuneScape was originally brought out in 2001 and then underwent a major update after 2007.

This digital artefact was intended to be research and text heavy, but I also wanted to ensure I kept the attention of my audience and the fun of the game. Therefore I decided to use a WordPress Blog. A wordpress blog would allow me to create a multimedia project to encompass all components present in the DA.

By collaborating all these aspects together on the WordPress platform I aim to give the audience a full nostalgic experience while still presenting a critical discussion.

Those components changed trajectory from the initial pitch to now

At the start of the digital media project I had a set trajectory aimed at focusing on nostalgia and its impact on the game, however at the BETA stage of the pitch i had a lot of feedback coming in that nostalgia was definitely a catalyst for people entering the game, however what kept them there was a lot of other different elements that are included in the participatory media culture. Therefore the trajectory of the DA adapted to suit what was relevant.

For the final project the components were as follows:

These visuals were used to capture the attention of viewers. Nostalgia is directly related to sensory experiences and visuals, therefore I hope to evoke the feeling of nostalgia in my audience as they look through the images and experience my produced content .

From the initial stages of the project development i had plans to create a podcast, initially this was planned as an informative speaking podcast conducted by myself alone, however i don’t have the lifetime experience with Runescape and for something so personalised such as nostalgia, I concluded it would be best to discuss with someone heavily involved in the scene all the topics I would be discussing. 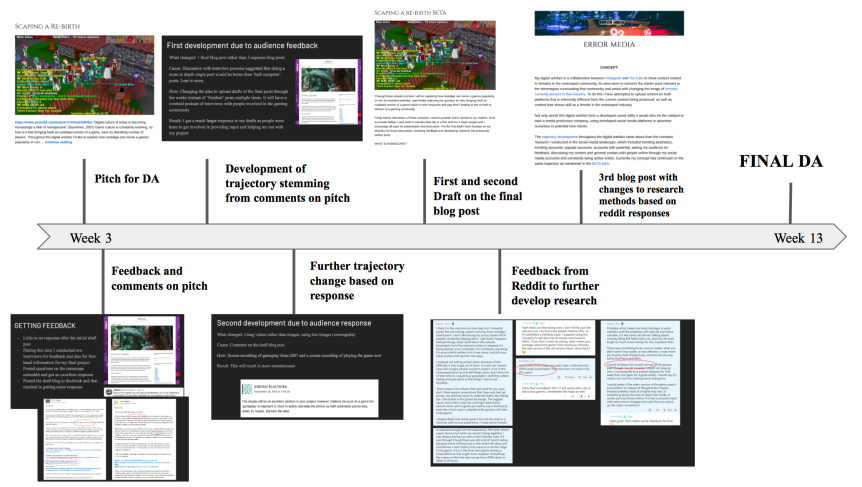 Accompanying this collection of images will be a podcast. This 4-5min podcast will be critically discussing findings and academic research such as Jaakko Suominen’s ‘The past as the future? Nostalgia and retro gaming in digital culture’ and Anthony Byrnes’s ‘Theater’s nostalgic connection:nostalgia’s impact on the entertainment industry and strategies to solve an age-old problem’.– PUT THIS ON THE DA THINGO

Accompanying I found it valuable to include texts such as; “Computer games as participatory media culture” by Joost Raessens. With the specific discussion of the interactivity “Interactivity refers to ‘a distinctive mode of relating to audiovisual representations or fictions. The player is provided with a way of directly taking a leading role in what occurs, given the means to control—at least in part—what will unfold within the scene on the screen’’ (Darley, 2000, p. 156).

One thought on “BCM215 DA CONEXTUAL”